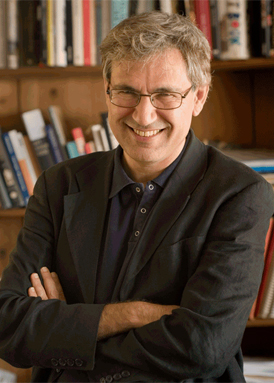 Orhan Pamuk was born in Istanbul in 1952. He was raised in Nişantaşı in a crowded family, similar to the ones he depicted in his novels Cevdet Bey and His Sons and The Black Book. As recounted in his autobiographical work titled, "Istanbul” he painted intensively throughout his entire childhood, teenage years, and early adult life until the age of twenty-two, imagining that he would become an artist in the future. He graduated from Robert College in Istanbul and after studying architecture at Istanbul Technical University for three years, he realized he neither wanted become an architect, nor an artist, quit school, and went on to study journalism at Istanbul University. Deciding to be a novelist at twenty-three instead, Pamuk set everything else aside, confined himself to his house, and began writing.  His first novel Cevdet Bey and His Sons in 1982 and received the Orhan Kemal Novel Award and the Milliyet Novel Prize. The following year, Pamuk released "The Silent House" and won Prix de la Découverte Européenne with the French translation of this novel in 2001. His novel "The White Castle" (1985), which chronicles the tension and friendship between a Venetian slave and an Ottoman scholar, was translated into many languages and was the first novel that brought international recognition to Pamuk. The same year, Pamuk moved to the U.S. with his wife and served as a visiting faculty member at Columbia University. In 1990, he published "The Black Book", which narrates the streets, history, chemistry, and fabric of Istanbul through a lawyer in search of his wife. Having won Prix France Culture with its French translation, this novel further spread his name both in Turkey and abroad as a writer that can narrate the past and the present with the same excitement. In 1991, Pamuk’s daughter Rüya (“dream”) was born. Pamuk published the lyrical novel "The New Life", which centers around a young engineering student inspired by a mysterious book. Narrating Ottoman and Persian calligraphers, as well as non-Western ways of seeing and painting around a tale of love and family intrigue, "My Name is Red" (1998) was awarded Prix du Meilleur livre étranger in France (2002), Grinzane Cavour (2002) in Italy, and International Impac-Dublin (2003) in Ireland. As of the mid 1990s, Pamuk began criticizing the Turkish state with his articles on human rights and freedom of thought. In 1999, he released "Other Colors", a wide collection of literary and cultural essays he published in various newspapers and magazines in Turkey and abroad. Snow, which he calls “my first and last political novel,” was published in 2002. Centered on the tension and violence between political Islamists, soldiers, seculars, Kurdish, and Turkish nationalists in the city of Kars, Snow was selected one of the best ten books of 2004 by New York Times Book Review. "Istanbul: Memories and the City", Pamuk published in 2003, is both a memoir recounting the author’s life until the age of twenty-two and an essay on Istanbul supplemented by his personal album, and works by Western artists, and Turkish photographers. Pamuk, whose books have been translated to 62 languages and sold twelve million copies worldwide, is the recipient of honorary doctorates from many universities. Awarded since 1950 and considered the most prestigious award in the field of culture in Germany, Peace Prize of the German Book Trade was given to Orhan Pamuk in 2005, "Snow" received Le Prix Médicis étranger, awarded annually in France to the best foreign novel. The same year, Pamuk was named one of the 100 most intellectual people in the world by Prospect magazine and in 2006, he was selected among the most influential people in the world by "Time" magazine.  An honorary member of the American Academy of Arts and Letters and Social Sciences Chinese Academy, Pamuk teaches at Columbia University one semester a year. In 2006, Orhan Pamuk was awarded the Nobel Prize for Literature as the first Turk to receive this honor. In 2008, Pamuk published "The Museum of Innocence" in which he addressed, privately and socially, themes of love, marriage, friendship and happiness, followed by "Pieces from the View: Life, Streets, Literature" (2010), which comprises essays and interviews centered around his life and his relationship with literature since childhood. In 2011, Pamuk published, in book format, "The Naive and Sentimental Novelist", a collection of the Norton lectures he gave at Harvard University in 2009. He opened the Museum of Innocence in Istanbul in 20012 and published the museum catalogue, "The Innocence of Things". The same year, he received the Sonning Award in Denmark for his extraordinary contributions to European culture. In 2013, he published "I am a Tree", a selection of the most favored pieces from his books. The Museum of Innocence was given the European Museum of the Year Award in 2014 by European Museum Forum under the auspices of the Council of Europe.