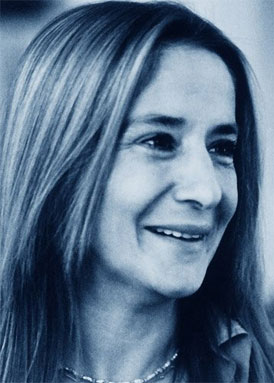 Tezer Özlü (1943-1986) became one of the most original writers in Turkish literature with the three “unique” books she published. She studied at the St. George’s Austrian School for Girls. Her first book "Eski Bahçe" (Ancient Garden; 1978) is a collection of short stories published in various magazines after 1963. Her first novel Çocukluğun Soğuk Geceleri (Cold Nights of Childhood; 1980) addresses, in a most unsettling and refined manner, her life from childhood onwards, her encounters with life physical-rough or diluted-indirect pressures, the otherness she feels “or is not allowed to feel,” and unconformity.

In search of the meaning of life and pursuing this search by following the trace and themes of three writers (Svevo, Kafka, and Pavese) she admires, Özlü penned her second novel/story in 1983 under the title, "Auf den Spuren eines Selbstmords" (In the Footsteps of Suicide), which was awarded the Marburg Literature Award the same year. The following year, the book was, in a sense, “recreated” in Turkish by the author herself with the title "Yaşamın Ucuna Yolculuk" (Journey to the End of Life; 1984).

Following her untimely death, Özlü’s first book of short stories was published as "Eski Bahçe - Eski Sevgi" (Ancient Garden-Ancient Love; 1987) to include the short stories she wrote after the publication of the first version. Various other journal entries and short story segments were collectively published in "Kalanlar" (The Remanants; 1990), Her script "Zaman Dışı Yaşam" (Life out of Time; 1998) was also published after her death. Following "Leylâ Erbil’e Mektuplar" (Letters to Leyla Erbil; 1995), her letters to Ferit Edgü was released with the title, "Her Şeyin Sonundayım" (I am at the End of Everything; 2010). "Çocukluğun Soğuk Geceleri" was translated into French in 2011.